Captain Jan Siemerink and the players of the Dutch Davis Cup team are ready for their duel against Austria. The Austrian team on the contrary is in a difficult situation. Just a few hours ago it became clear that their number two Andreas Haider-Maurer has to draw back from the singles today. The world’s number 97 has been replaced by Oliver Marach. Robin Haase will play the opening match against this number 63 in the ATP Doubles Rankings. Followed by the match of Thiemo de Bakker against former top ten player Jurgen Melzer. The Austrian doubles specialist Alexander Payer will not be in Groningen to represent his country. Instead the Dutch doubles specialist Jean-Julien Rojer and Robin Haase will play Austrians Julian Knowle and Oliver Marach in the doubles on Saterday. Andreas Haider-Maurer is still ill and will not play on sunday. Instead the Austrian hitting partner Philipp Oswald (world number 848) will play an inofficial match against De Bakker. Jesse Huta Galung will play the opening match on sunday against Jurgen Melzer. For all the Davis Cup fans, have fun this weekend! 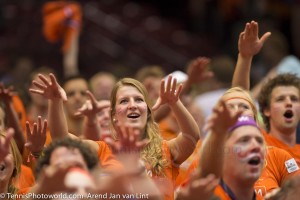