CLICK HERE FOR THE PHOTO GALLERY OF ALEXANDR DOLGOPOLOV

No pressure at all: A relaxed meeting with Alexandr Dolgopolov

The first thing to notice about Alexandr Dolgopolov in Umag is his smile. Everywhere he goes, his smile goes with him. With guys like Gasquet, Monfils, Robredo and Fognini playing here, does he feel pressure? “No, not at all”, answers the former champion of Umag in 2011 and current number 38 of the world. He had a tough start this season, having problems with injuries. Now he is very focussed and relaxed. “I always want to win, so when I’m losing matches I’m extra focussed. You want to win these matches again.

“I do not feel pressure at all.”

Why he’s so passionate about tennis is a difficult question for the relaxed Dolgopolov.  “it’s just my live. I play the game since three years old. I saw my dad coaching Medvedev and I liked it. Since then I play it.” What he really likes about the game is the competition. “The most fun thing to do on the court is to play points, games, to compete with the other players.”  Unlike players like Nadal, Dolgopolov is not a big fan of rituals. He is just happy to play and compete.

“I’m happy to play and compete.”

He does not have any tricks to get into a ‘flow’ on court, a state of mind and body in which everything works out well. “Actually when I play really well, I’m just scared I won’t play that well the next match. Usually when you play really good one match, it’s not easy to keep up the same level. You should not  get to emotional when you have a big win, just think off how to play your next opponent.”  Dolgopolov can’t mention just one best match in his career. There are matches where he beat great players, but did not play well and matches he lost, while playing a lot better. “It’s tough to say what’s the biggest win ant the biggest match. It’s not only the results that counts.”

“When I play very well, I’m just scared I won’t play that well the next match.”

Besides his smile also his haircut draws attention. He no longer has his dreadlocks, just normal straight hair at the moment. “It’s not an easy haircut and sometimes it’s good to go back to normal, in a good way.” What can we expect from him in the future? “You can expect anything from me.”  His ultimate goal is to become world number one. To reach that goal it’s necessary to improve almost every aspect of his tennis game, Dolgopolov mentions. “The most important things are my service and physical. To compete with the top six of the world, you have to be fit to play five sets, sometimes more matches in a row.”

“You can expect anything from me.”

With Clay being his favourite surface and liking the warm and slower conditions on court in Umag he is feeling very confident. Nobody should underestimate Dolgopolov. With a smile he wears a T-shirt saying, ‘prepare, attack, destroy’. Focussed and relaxed, that’s Alexandr Dolgopolov. 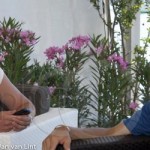 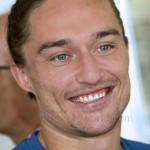 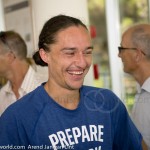 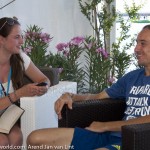 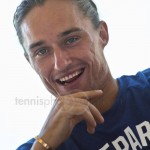 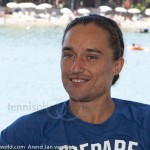