Put Goran Ivanisevic and Patrick Rafter together on a couch, ask them some questions and the result, as you can see on the pictures below,  is a lot fun. That was the case in Umag where the two of them will replay one of the most famous Wimbledon final in history. Goran Ivanisevic, who could only enter the tournament while he was granted a wildcard, received the finals. Patrick Rafter from Australia was his opponent and Goran didn’t made him laugh that day as he did this morning in Umag, because he defeated him in five sets. The Guardian wrote: ‘Goran Ivanisevic, one of the most unpredictable talents tennis has produced, finally won the Wimbledon title at the fourth time of asking, defeating Australia’s Pat Rafter 6-3, 3-6, 6-3, 2-6, 7-5 yesterday afternoon amid the sort of scenes of wild enthusiasm and rapturous joy that have never been witnessed on the centre court.’ And that is so true.
Of course there has been o lot of memorable finals, but this one was really special. Asked about his opinion of the golden generation of today Roger Federer, Novak Djokovic and  Rafael Nadal (and before his injury also Andy Murray), Rafter answered that tennis in his days tennis was different and that it is hard to compare nowadays tennis with yesterday tennis. ‘These guys are really good and I’m glad I didn’t had to compete with them when I was on the tour.’ Here the Croatian tennis hero interferes: ‘Okay  they are good, but not necessarily better. Don’t forget the technical improvements of the rackets, the strings and the adjustments of the different surfaces especially of the hardcourts.’  And it must be said that in addition to Ivanisevic and Rafter also guys like for instance Pete Sampras, Andre Agassi, Boris Becker, Richard Krajicek and Stefan Edberg knew how to hit a ball.
We asked Goran and Patrick what aspect they liked the most and what didn’t liked at all being a professional tennis player on the tour. Rafter: ‘The travelling, every week in another country. It may look glamorously,  but it isn’t at all. The nicest thing I found was being in the final of a tournament and of course preferring to win. Especially the big tournaments. Yes, the best thing was that you could make your dreams come true that way. Or just not entirely if you lost’, he adds with a smile. This also goes for Goran. He hated the travelling, but playing a tournament, getting better during the week, producing some aces en playing the finals in front of an enthusiastic crowd is what he liked about being on the tour.
Today The Australian can have his revenge for his lost Wimbledon final against Goran, however playing an exhibition of course is not exactly the same as playing a Wimbledon final. No pressure for the players and a lot of fun, that’s what is to be expected.  In the Wimbledon final against Ivanisevic Rafter admits that he was nervous, but not in the way he was in his previous final match at Wimbledon in 2000 when he faced Pete Sampras. ‘In that final I really choked. Against Goran that was not the case.’ Asked how he prepared for the match Rafter answered that has to be fit and in good shape, so he did his work on the farm en did some fitness. But most of all to be prepared, he said, you must hit balls. And he described the fact that one of the remarkable things of playing tennis at an older age is that your mind tells you were the ball is coming and that you think you’ll be there on time, but that you have to conclude that you’re still three steps away from the ball when it has arrived. Although the match is just for fun, some rivalry is in the air: In Umag the stadium is named after Goran Ivanisevic. In Brisbane a stadium is named after you Patrick, isn’t it? ‘Yes, and it is bigger than the Goran-stadium here in Umag’ (big smile on the Australian face). Yes that’s true reacts Goran, ’I have played there. Actually I have tried to ruin it’ (big smile on the Croatian face). 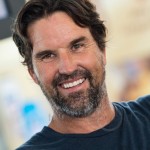 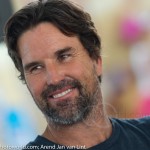 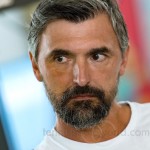 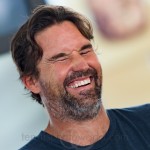 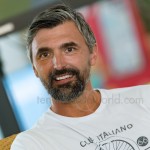 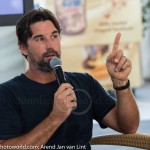 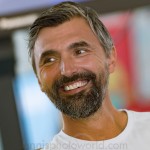 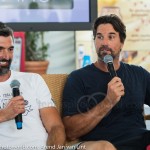 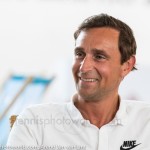 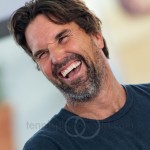 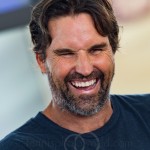 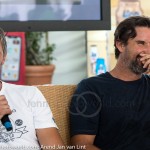 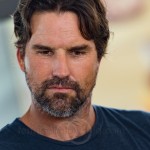 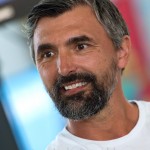 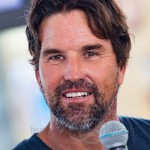 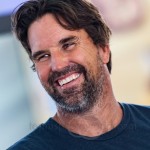 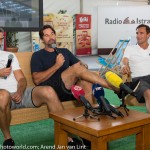 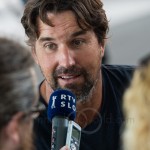 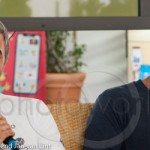