Today Anna Karolina Schmiedlova will play the semi final in Katowice against Alison van Uytvanck from Belgium who defeated her compatriot Kirsten Flipkens. Earlier this week we have had an interview with the sympathetic Slovak Anna Karolina. That was after her victory over Katerina Siniakova from the Czech Republic. So for those who don’t know Anna Karolina so well, let us introduce this talented 21 years young lady. We were pleasantly surprised to see her in Katowice at all, because in February in the Netherlands she told us that she probably wouldn’t come to the Katowice Open, since this is no longer a clay court tournament (clay is her favorite surface). Anna: ‘That’s correct, but this tournament is close to my home town (Bratislava, TPW), so it’s only three hours and I thought why not give it a try. And so long, it’s going quite well.’ Being a semi finalist that’s quite an understatement.

In the beginning after winning the first set (6-1) against Siniakova the match seemed to be an easy win for Anna, but it wasn’t at all. Katerina fought her way back into the match. Anna: ‘ I made some mistakes at the beginning of the second set and I didn’t finish some easy balls so, yes I gave her the opportunity to come back and she definitely started to play better. I was almost playing all the balls cross court and didn’t play as aggressive as I should. Maybe I had to play more volley’s. But no mistake, I new that this was going to be a tough match. I played Katerina two times, and I lost last year, so I was warned.’ In the third set Anna Karolina was playing the balls more deep, close to the baseline and managed to higher her level. ‘I was thinking what to do and I decided to play more aggressive. I move quite well, so I had to use that capacity.’ Anna Karolina is not the type of player that is yelling and screaming, let alone smashing rackets and things like that, when things on the court are not going the way she wants them to go. ‘I try to stay calm, although that’s  not easy all the time. I try to coach my self. I have to, because at this moment my coach is not in Katowice, so I’m on my own. I try to be mentally strong. I think at this level in the WTA tour, the mental aspect is the most important in tennis.’

Anna started playing tennis when she was almost eight years old. ‘My parents introduced me to tennis, they wanted me to do some kind of sport. They are sporting them selfs, though they are no tennis players. My father played hockey and my mother was active in water skiing. They didn’t mentioned me to be a professional tennis player, but I turned out to be pretty good in playing tennis and I liked the game and finally I became a pro.’  Was your younger sister Kristina involved in tennis because of you? Anna:’I think so, actually she is really good. About a week a go she played the final of the Junior masters 2015.’ You and Kristina are quite close aren’t you? ‘ Yes we are, I’m so nervous for her when she plays. The Fed Cup captain say that we should not practices tougher. I can’t imagine to play a match with her. On the tour we could travel together, but I wouldn’t like to play a match against her. She my sister! I have asked for instances the Pliskova sisters, and they say that the most difficult matches are the one’s against each other.

What would you be doing if you were not a professional tennis player? ‘I think I would study medicine, probably I have seen to many shows on TV about doctors’ she laughs, ‘but yes that’s what interesting me, but now I can’t combine that with my tennis career, but perhaps later I will do that.’ We asked her about her favorite tournament. ‘Roland Garros. I have played there very well. Won against Venus (2014 TPW), as a junior I played the final, and I like the courts, clay courts my favorite surface.’ Do you have a favorite tennis player? ‘No not really.  When I was young I watched Djokovic and I like the way he plays, so maybe Djokovic, but I don’t really have a favorite. My favorite animal?’  She start laughing and says: ‘That’s a horse. As a litlle girl I had many books about horses and I was always reading about horses. I wanted to ride horses, but I never did.’ So when your tennis career is finished you ‘re going to study medicine and ride horses? ‘I don’t know yet, but that could be the case! What is your favorite music? I’m not interested in music, but if I have to choose between classic and modern, I choose modern. Kristina is a music fan, I’m not, we’re always fighting about that. She likes rap and hiphop, but I don’t. The last question is about her favorite food. ‘Pasta and some Slovak specialties.’ 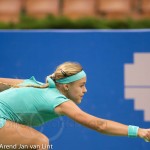 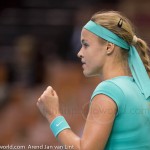 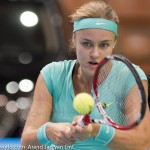 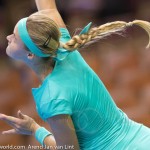 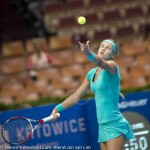 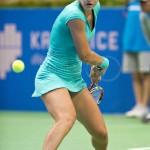 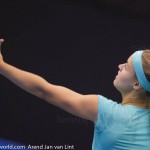 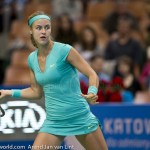 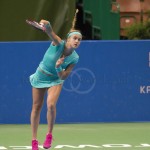 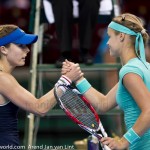 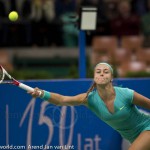 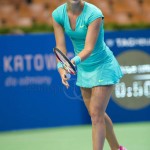 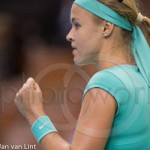 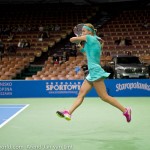 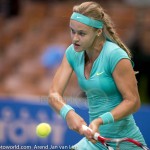 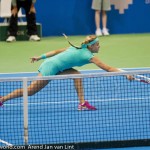 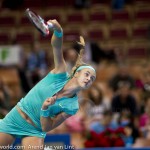 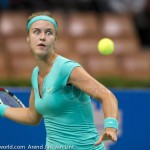 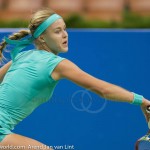